She experimented with techniques learned in college, adding weaving, photography, cyanotype, and image transfer in and on top of the clay’s surface. When she attended a workshop in papermaking in 1982, she turned to making her own paper and introducing outside elements to that medium also. In 1990 she produced an instructional video, “Practical Papermaking”, demonstrating simple tools and techniques for schools and individuals.
Beginning in the late 1980’s, she attended fine art festivals from Lincoln Center to Sausalito, receiving prestigious awards at Penn State, and across the Gulf Coast. After selling her mixed media art in Memphis, Atlanta, Nashville, and Baton Rouge, and showing nine years consecutively at the N.O. Jazz Fest, she and her husband, Doug settled in Bay St. Louis in 1994. 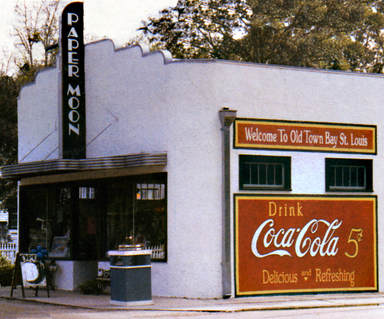 Redirecting her skills as a local merchant, she focused on making the unique vintage shop and gallery “Paper Moon” a successful retail cornerstone of the Bay for the next eight years. At that point, she and Doug turned their sights to another downtown property, a part of the McDonald family’s hardware and lumber. The old lumber shed near the railroad became a modern arts incubator, with 11 studios and classrooms, and tenants of painters, sculptors, draftsmen, writers, jewelers, potters, and photographers.
After Katrina, the art center struggled, and eventually became the amalgamated studios of Vicki, with sections devoted to kilns, printers, found objects, and jewelry making. Recently another technique has been added to her inventory with the acquisition of a one-ton antique printing press and over 50 cabinets of type. She is currently planning classes and workshops, to eventually develop a book arts curriculum including hand papermaking, photography, letterpress, and typesetting.

Awarded two Individual Artists Fellowships from the Mississippi Arts Commission (1986, 2008), an Artist Residency in Berkeley (2006), among other accomplishments, she has published two books of photographs, created three public art installations in Bay St. Louis, won local poster and art competitions, and has designed the Old Town Bay St. Louis brochure for over 20 years.
Read the 2008 Huffington Post article featuring Niolet's work and perspectives, and the comparison to Joseph Cornell and Wall-E.
https://www.huffingtonpost.com/kimberly-brooks/emwall-eem-katrina-and-th_b_120781.html+&cd=1&hl=en&ct=clnk&gl=us